The Singapore Biennale 2014 showcases the work of contemporary artists from across South-East Asia and beyond, blending artistic mediums in a number of the city’s art galleries, museums and public spaces. With Asia attracting attention for its race to economic supremacy, art acts as an outlet to showcase the region’s cultural nuances in the context of gargantuan economic and social change.

Societies are expressed through art. The dynamic socio-political mix across the region manifests itself in these works. What I found most striking was that here, in a dictatorship like Singapore, artists from other countries were permitted to express their political dissent and social commentary without fear. Local artists were not given the same privilege. Most of the local works would fit into the ‘pretty’ category or gained their depth from explaining the human condition apart from the political. Few people recognise that it is no exaggeration to call Singapore a dictatorship, little activism or questioning of the political order is permitted in this wealthy city state dominated by one party and run like a corporation.

With this in mind I took more joy in the work of artists from other parts of the region. There was a real emphasis on how urban communities are changing, buildings and neighbourhoods being torn down, natural ecological systems being disrupted by development and the often monotone life of the urban landscape.

Here are a couple of interesting examples of the art works from the Biennale, the rest you will have to discover for yourself; 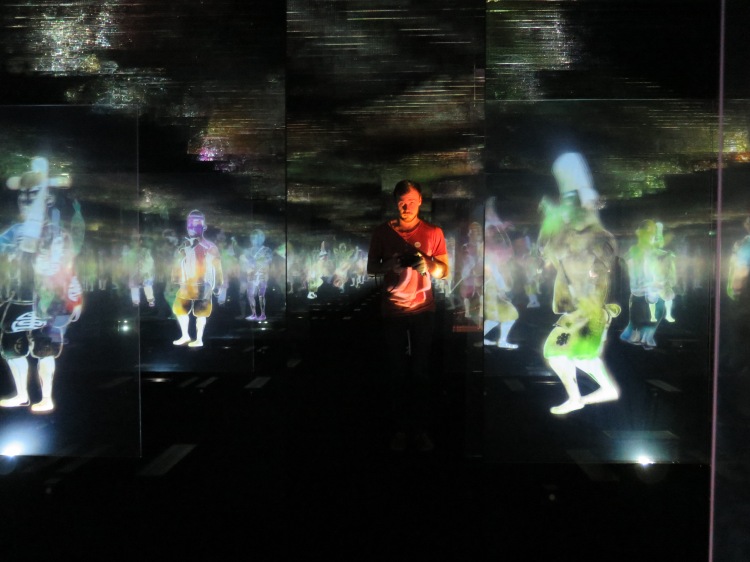 Peace can be realised even without order – teamLab – Japan – 2012
This was a truly spectacular work where I felt as though I were standing in a room of infinite mythical dancers. The projected bodies and sound interact with individuals in the room by utilising motion sensors, engaging in more direct activity as one moves closer to a particular panel. This artist collective draws their inspiration from traditional indigenous performance from the Japanese archipelago.  Click here to read more about the artist.

Untitled – Khvay Samnang – Cambodia – 2011-2013
Khvay tosses a bucket of sand over his head while standing in various lakes across the Phnom Penh area. The work shows how the balance and beauty of the city’s water ecology is being sold off to developers to be filled with sand and built upon. It is a striking reminder of how natural water bodies and flows are interrupted by the expansion of our cities. I automatically thought of Mexico City, once set upon a beautiful lake and criss-crossed with canals. The lake was drained due to increasing public health issues to the population and to accommodate the growing development of the city. Click here to read more about the artist.

I was only able to visit the exhibits housed in the festival epicentre, Singapore Art Museum (SAM). A new national art museum is being prepared for Singapore in 2014. The space will be four times as large as the current museum, opening new opportunities for Singapore to become a creative hub of South-East Asia. I am left wondering whether it will simply be a hub for foreigners to show their messages to Singaporean audiences and international tourists or if the space will start to allow local issues and challenges to be voiced as well.

To read more about the artists on display click here.

One thought on “Snapshot of the Singapore Biennale 2014”